APCC completed their winning streak in the competition with an emphatic 81 runs over CCAP.

The CCAP won the toss and elected to field first, thus putting the APCC in to bat. The APCC got to a slow start with the early fall of the wicket of the APCC Captain and Best Player of the League, Hashim Mohammad, as well as the slow run rates in the early overs. This gave the CCA Panthers a momentary shine that would soon fade away when Kalpa Alwis threw in the fireworks.

At the fall of Hashim and Saad Butt’s wickets, it was the turn of Kalpa Alwis to come in to bat at a time the APCC was in a very tight dilemma.

Kalpa changed the fortunes of his team, aided by Joseph Ishua, Saad But, Adnan and Taimu Bashir, as they took their team to 189 runs with Kalpa playing not out. It must also be emphasized that the poor fielding of the CCAP aided the APCC in their resounding victory over the CCAP.

At the end of 20 overs and still not out, Kalpa Alwis had scored 90 runs off 48 balls while Joseph Eshua scored 33 runs off 47 balls, Mohammad Hashim 0 run off two balls, Saad Butt 13 runs off 12 balls, Adnan Akbar two runs off two balls and Taimu Bashir 14 runs off 11 balls and not out.

In the second innings, the CCA Panthers came in to chase 189 runs and needed 190 runs to win. That became a mission impossible as their best efforts could only produce 108 runs at the end of 20 overs for the loss of nine wickets.

However, top scorers on the CCA Panthers side were Aadil Bathia, 19 runs off 20 balls, Nafees Khan 12 runs off 15 balls, Ayo Ejegi 14 runs off 14 balls, Pankaj Thiara 21 runs off 21 balls and highest scorer Manmeet Bisnoi with 26 runs of 28 balls

At the end of the match Kalpa Alwis emerged the Player of the Match and the Best Batsman, while Saad Butt was the Best Bowler with three wickets.

In the presentation ceremony, Mr. Deji Fisher, representing the main sponsors of the League, Iris Smart Technologies, thanked the organizers of the league for a job well done and pledged more support for the Abuja Cricket League in the years ahead.

Various cash prizes and 50 kg bags of Rice were given to the outstanding teams and players courtesy of Iris Smart Technologies and Olam Rice.

The Best Emerging Player was Seye Oluwaseye, who got ₦5,000, just as the Dr. Katherine Chatham Fair Play Award went to APCC.

With over 60 percent of travelers to Namibia residing in Lagos and surrounding states, High Commission of Namibia in partnership with Air Namibia has opened a visa processing desk in Lagos.

The visa processing office located at the GHI House in Ikeja GRA, Lagos was yesterday opened to the public for submissions and pickup of Namibia visas.

Speaking at the unveiling of the office, High Commissioner of Namibia to Federal Republic of Nigeria, His Excellency, Humphrey Desmond Geiseb said, since the launch of Air Namibia direct passenger and cargo flight services between Windhoek and Lagos on June 29, 2018, Namibia has been providing a quantum leap for the bilateral trade relationship with Nigeria.

Geiseb said with a population of 2.4 million and one of the most stable, peaceful political environment in Africa, coupled with the ongoing expansion of the Port of Walvis Bay, Namibia is currently positioning itself as a gateway to the more than 240 million people in the broader Southern Africa market.

He said tourism is one of the country’s fastest growing industries and provides significant employment opportunities, adding that Namibia is a nature-based tourism destination with spectacular scenery, including wide variety of wildlife, the world’s oldest desert, the world’s tallest sand dunes, and community-based nature conservancies.

The commissioner who confirmed that 700 visas were issued in 2018, therefore, advised discerning Nigerians who love to relax and those willing to invest to take advantage of the many tourist attractions and investment opportunities that abound across the country.

“Namibia is a tourist destination in Africa with tourism accounting for over $500 million contribution to the country’s Gross Domestic Product (GDP).

Our decision therefore, to open a visa processing centre in Lagos in partnership with Air Namibia is a strategic move aimed at easing the burden of having to travel to Abuja before getting a visa thereby further boosting diplomatic ties and trade between Nigeria and Namibia and offering choices and easy access to our highly esteemed visitors and would-be investors.”

Also speaking, senior public relations officer, Home Affairs and Immigration, Ms Salome Kambala, said that in as much as Namibia is ready for business and investors, visitors and would-be investors were required to meet certain obligations before they visit the country.

The National Film and Video Censors Board (NFVCB) and the Alliance Francaise have signed an agreement to showcase and distribute the two countries movies through the “French-Nigerian Film Distribution Conference.”

The agreement was signed during a courtesy visit by Jerome Pasquier, Ambassador of France to Nigeria, to the Headquarters of the NFVCB on Tuesday in Abuja.

Mr Thomas, in his remarks, said the collaboration was to present a platform where investors, producers, distributors and other stakeholders in the motion picture industries of both countries could meet for mutually beneficial deals.

He noted that the collaborative venture will, among other incentives, encourage and promote the distribution of Nollywood movies in France.

He explained that both parties have conceived ‘French-Nigerian Cinema Days’, to screen and showcase the two countries movies, as part of the distribution conference scheduled to hold later in the year.

“Our Nigerian distributors would be more than happy to collaborate with big time French distributors such as Pathe, Studiocan and Bacfilms as planned in the coming collaboration conference.

The French distributors take delight in releasing movies from many different nationalities, whether big or small, as it is their belief that the French moviegoers love movies from around the world.

France prides itself as a country of moviegoers with over 5,000 screens, while in Nigeria, we are proud to say that we have achieved 200 screens, from 39 in the last two years.

Its film industry is acclaimed to be living ‘La vie en rose’ (life in roses), that its Nigerian counterpart would love to attain.”

The Executive Director, however, decried the high rate of piracy as a major bane facing the evolving Nigerian moving industry, especially with the emergence of digital distribution platforms.

He, therefore, solicited for technical support from France to make the sector strive with piracy effectively nipped.

In his remarks, Mr Pasquier, the French Envoy, said he was delighted at the partnership, adding that it was a common ground for both countries to grow their film industries and also strengthen bilateral relations.

NFVCB is a Federal Government body that regulates the films and video industry in Nigeria. The board is empowered by law to classify all films and videos, whether imported or produced locally.

It is also the duty of the Board to register all films and videos outlet across the country, as well as keep a register of such registered outlets, among other functions.

The 2019 PositiveNaija Video Event aims to promote the following:

Inform the world through your video on the vision, nature, relevance and impact of your work for the good of humanity.

In addition to the objective of the video event, the following should be included in the video: 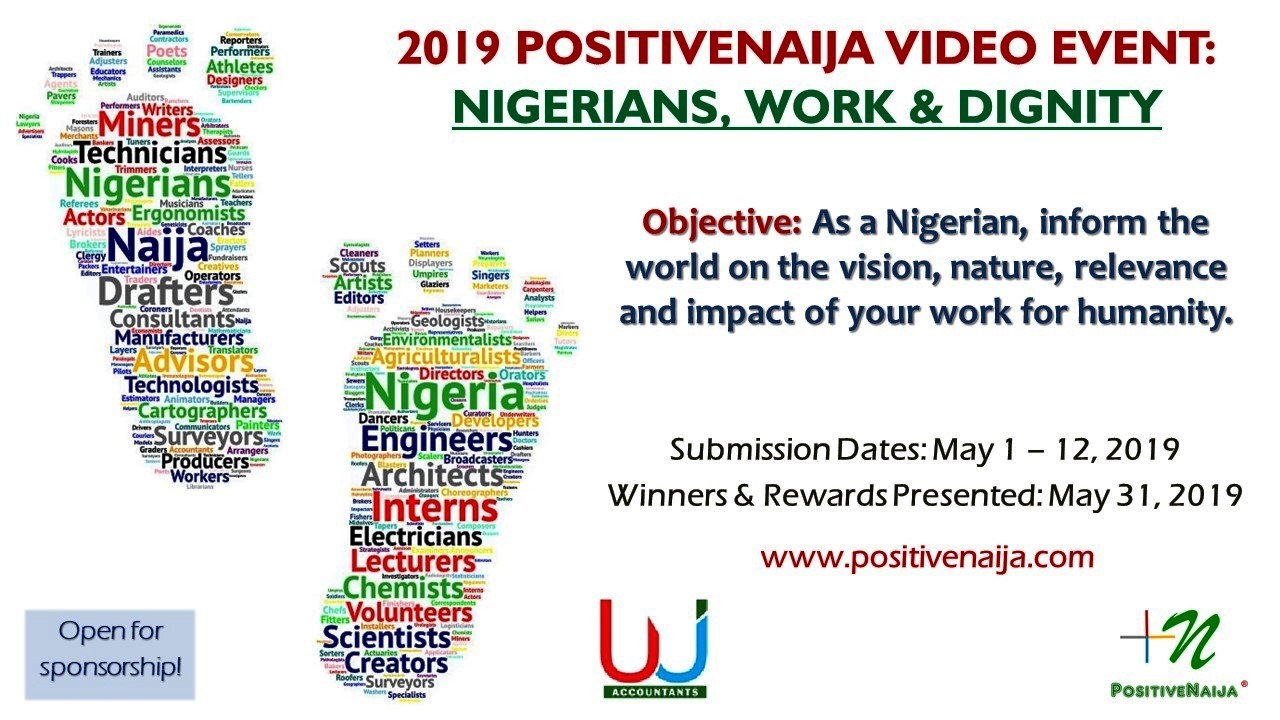 END_OF_DOCUMENT_TOKEN_TO_BE_REPLACED

The Bangladesh High Commission in Abuja, Nigeria has participated in the Kaduna International Trade Fair—organized by the Kaduna Chamber of Commerce, Industry, Mines and Agriculture—for the first time. The event took place between March 29 and April 7, 2019.

Dr. Okechukwu Enyinna Enelama, minister for Industry, Trade and Investments of Nigeria, inaugurated the fair on March 29, 2019. Md Shameem Ahsan, Bangladesh high commissioner to Nigeria was present—along with diplomats from other countries, local dignitaries, and the business leaders—at the inaugural ceremony which marked the 40th yearly event.

In line with the present government’s emphasis on “economic diplomacy,” Bangladesh’s mission put up a large stall with its own collection of exportables. Bangladesh’s stall received the Best Foreign Participant Award, and a crest was handed over, ceremonially, on the concluding day, by Mr. Abidul Yazid, patron of the trade fair.

The High Commission is in the process of launching a commercial display centre at the chancery soon, to showcase exportables to the visitors and Nigeria’s potential importers and investors.

Zainab Shamsuna Ahmed, appointed by the Africa Union (AU) as the chairperson of the Board of Trustees (BoT) of its peace fund

Zainab Shamsuna Ahmed, the finance minister of Nigeria, was on March 21 [2019], appointed by the Africa Union (AU) in Addis Ababa, Ethiopia, as the chairperson of the Board of Trustees (BoT) of its peace fund.
This Day reports that the board is made of five members drawn from each region of the continent. The board also has non-African members (United Nations and European Union) as international partners. According to the report, the finance minister represents the Western African sub-region on the board.
The report quoted a statement by the special adviser to the minister on media and communications, Paul Ella Abechi, as saying Ahmed expressed appreciation and commitment towards achieving the agenda of the special fund. Accordingly, it was learnt that the protocol relating to the African Union Peace and Security Council (PSC) provides for the establishment of a special fund to be known as the “peace fund”. This fund comes with the objective of providing the necessary financial resources for peace support missions and other operational activities related to it in Africa. According to the report, the peace fund is meant for the prevention and management of conflicts, and the promotion of peace in Africa.
It also said the board of trustees was established by the assembly of the union in July 2016, to ensure strategic coherence, enhanced governance, financial and administrative oversight of the peace fund.