Nigeria and the European Union (EU) have agreed to enhance cooperation in the areas of corruption, security and economy, to facilitate investment flow from the EU states into Nigeria. 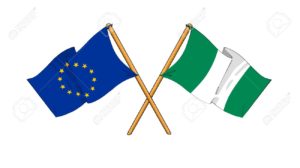 Briefing reporters, Arion said the meeting focused on Buhari’s three-point agenda of security, economy and corruption as well as others, which include irregular migration and the humanitarian situation in the Northeast. The envoy said that EU and Nigeria could work together for mutual benefits of both parties and enhance peace, security and economic cooperation.

“We believe that our prosperity is your prosperity. We see West Africa as a block of ECOWAS and Nigeria as the economic base. We see West Africa not as export designation for the EU but investment destination for EU; we don’t have hidden agenda. I will say that what we can do is to facilitate the EU investment in Nigeria, not only at the level of bilateral relations but in other fora. I believed that there are a lot of things we can do together basically in two main areas one is peace and security. We really believed that our security in the EU is your security; I believe we are fighting the same terrorists.”

Nigeria has emerged the chair of the AU Peace and Security Council (AU-PSC) for the month of July 2017.

The council is the standing organ of the AU for the prevention, management and resolution of conflicts.

It is a key element of the African Peace and Security Architecture (APSA), which is the umbrella term for the main AU mechanisms for promoting peace, security and stability in Africa

It was established to be a collective security and “early warning” arrangement with the ability to facilitate timely and efficient responses to conflict and crisis situations.

The AU-PSC also works in support of peace-building and post-conflict reconstruction as well as humanitarian action and disaster management.

Arrion made this known at a lecture which the IBB Golf Club organised in Abuja.

The lecture had as its theme: ‘40 years of European Union in Nigeria: Lessons learned and the way forward’.

The envoy added that the union would scale up its efforts towards the country’s institutional, political and economic development for a more prosperous future.

He said Nigeria could not be said to be poor, as it has enough resources to meet its developmental needs.

Arrion called for a more equitable distribution of the nation’s wealth to ensure growth and stability and unleash its enormous economic potentials.

He explained that the combine aides to the country were about ten percent of its country’s annual budget.

According to him, the official development assistance (ODA) flow in Nigeria is about $2.5 billion yearly, which corresponds roughly to about 10 percent of the federal budget (N7,3trillion  or $24 billion).

This, he said has raised the question of should EU continue to give aide to Nigeria.

Arrion, however, said the regional block would scale up its efforts towards the country’s institutional, political and economic development for a more prosperous future.

“We are not offering more financial support, we are proposing more political and policy dialogue, technical assistance, capacity building, training, transfer of technology,” he said.

“We also proposing more advocacies for more private investments and other innovative sources of funding.”

The envoy, therefore, called for improving in tax collection to finance the development of the country.

According to him, Nigeria must find alternative funding to ODA including improved tax collection which must be improved at least five times more and also spend better.

“About 10 million people (10 percent of adult population) are registered for personal income tax (half of them in Lagos).

“The rate of VAT compliance by registered entities is about 12 per cent. The rate is lower for corporate income tax nine per cent.”

He also said Nigeria must attract more foreign investment five times more, to reach the level of Angola or Vietnam for instance and put in place more and better Public Private Partnerships.

Arrion said the evolution of the vibrant relationship of equal partners between Nigeria and the EU was founded on shares values and aspirations and mutual trust.

According to him EU in its 40 years of engagement with Nigeria had identified development priorities, funded projects to stimulate the Nigeria’s economy, reduce hunger and disease.

He said the union had also helped to enhance institutional capacities, strengthen governance and fight insecurity in Nigeria.